On the capture of the fitst Episemion:
"According to a personal comment from H. Gonin (in Dadaniak et al., 1995), Ep. krystallinoron was first collected in 1983 at Médouneu, near the airport, in the brook Ottomitan in Gabon, three years before the first collection of Ep. callipteron. Close to this place is the collection locality BBS 99/ 22. Both localities are in the Komo River system. Other localities are along the road N5." - Sonnenberg 2006

A: There are currently 5 species in the subgenus Diapteron (molecular studies have shown that Diapteron is close to Chromaphyosemion and Kathetys, two subgenera of Aphyosemion, and ecobiogeography together with a PAUP analysis of external characters have shown the same, adding Episemion to that phylogenetic group). In this latter publication (Huber, 1998), it is suggested that Diapteron species are very young, possibly less than a few thousand years. The species are, though, intersterile in crossings, except if male unpaired fins are cut to confuse the selecting female. Genetically, however, the picture is much more complex with reported intersterility within one taxon (e.g., cyanostictum) or interfertility of first generation for some distinctly colored populations of distinct taxa. The best is then to consider these 5 "species" on the basis of the single (rather stable) diagnostic characteristic, i.e. the male color pattern (and similarly for many superspecies of the genus Aphyosemion): (1, 2) the dominant and widespread blue (cyanostictum) and yellow (georgiae) phenotypes with blue spots on sides and fins on red background (note that some populations of georgiae show orange instead of yellow, completely on Anal fin and lower Caudal fin); (3,4) the locally confined to the dead-end eastern distribution, blue (abacinum) and yellow (seegersi) phenotypes with blue bars on sides and fins on red background; (5) the locally scattered double banded at Caudal fin yellow (fulgens) with red spots on red background (derived from georgiae). The recently collected population "PEG98/5" fits with seegersi in a large sense (in the same way than the orange georgiae fits in georgiae): it shows yellow orange markings on lower unpaired fins like seegersi, though fainter. Therefore, to that complex picture, the only current practical answer is to name population "PEG98/5" from northeastern Gabon: Aphyosemion (Diapteron) aff. seegersi, where aff. is an abbreviation for affinis meaning similar to. The population is distinctive from abacinum by color pattern of the distal part of fins in male. Further studies in the field and by crossings with abacinum and the typical seegersi (when it will be ultimately brought back alive from Congo) may give a better answer, but nothing is less certain (Jean Huber, finalized, September 2000). - http://www.killi-data.org/faq.php FAQ #4.

Discussion
Episemion is only known from a small number of localities in southeastern Equatorial Guinea and northern Gabon (Map 1). According to a personal comment from H. Gonin (in Dadaniak et al., 1995), Ep. krystallinoron was first collected in 1983 at Médouneu, near the airport, in the brook Ottomitan in Gabon, three years before the first collection of Ep. callipteron. Close to this place is the collection locality BBS 99/ 22. Both localities are in the Komo River system. Other localities are along the road N5

Interestingly, no Epiplatys is known to occur within the known range of Episemion, whereas in the surrounding areas different Epiplatys species are very abundant and are often the most frequently found killifish in suitable habitats (Huber, 2000; pers. obs.). The similarity in appearance to Epiplatys could be due to parallel adaptation to a similar habitat, e.g. larger streams and relatively fast-flowing water.

Episemion is, for example, found in faster flowing and deeper rivers than Diapteron (pers. obs.) and possibly Kathetys, but all prefer flowing water (except K. bamilekorum (Radda, 1971b), which lives in swampy waters). In addition, Diapteron appears to have a different feeding ecology compared to other nothobranchiid genera (see Brosset, 1982 and Brosset & Lachaise, 1995 for a discussion of the ecology of nothobranchiid fishes of the Ivindo Basin).

Episemion is a valid genus, probably related to the genera Diapteron an idea several authors have postulates but as of 2006 this was actually not supported by mitochondrial DNA data. Sonnerberg wrote in 2006: "Detailed studies of morphological and osteological characters are needed to disclose apomorphies that might support phylogenetic placement within the DNA analysis. Van der Zee (2002) considered the dark lateral stripe of Episemion to be a possible indication for a close relationship to Chromaphyosemion, the species of which have two lateral black stripes, of which the upper one extends from the lower jaw to the base of the caudal fin, or to Kathetys (Huber 1998a), which sometimes has a dark lateral stripe in stressed specimens. On the other hand, a lateral stripe on this part of the body can also be observed in nothobranchiids (e.g. in Aphyosemion hera Huber, 1998 [Nothobranchiinae]; and in several other species of Epiplatys and Scriptaphyosemion [both Epiplateinae]), often only in stressed specimens. This indicates that a dark lateral stripe running from the lower jaw through the eye and extending to the caudal peduncle might be a plesiomorphic character of the Nothobranchiidae." 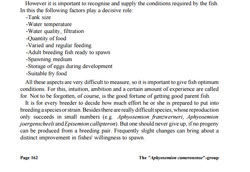 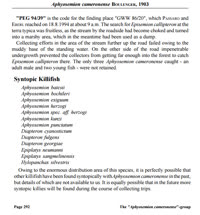