The genus Lacustricola was found to be polyphyletic, i.e. with two distinct and non-related species groups. The first group comprised all eastern Africa species including the type species of the genus, L. pumilus (Boulenger, 1906); and the second group comprises all southern Africa species (Bragança and Costa 2019). The southern Africa Lacustricola species were considered to be sister to Micropanchax and both these genera contain species that are currently considered to have broad distribution ranges across the African savannah associated water systems (Bragança and Costa 2019). Ongoing critical evaluation integrating molecular, morphological and osteological data support the proposed split of Lacustricola (Bragança unpublished data). This work will result in the establishment of new generic names, but in the present study, Lacustricola refers to species belonging to the eastern Africa clade and “Lacustricola” to species from the southern Africa clade, following Bragança and Costa (2019).

The southern “Lacustricola” clade is much more diverse than the eastern clade. Species in the southern clade have broad distribution ranges across most river systems in southern Africa, from the Nseleni in the south through the Okavango, Cunene, Kwanza, Zambezi, coastal river drainages in Mozambique and tributaries of the Congo (Wildekamp et al. 1986; Skelton 2001). The deep bodied species previously placed in the genus Hypsopanchax Myers, 1924, such as H. jubbi Poll & Lambert, 1965, H. jobaerti Poll & Lamberti, 1965 and H. stiassnyae Van der Zee, Sonnenberg & Mbimbi Mayi Munene, 2015 were recently found to belong to the southern Lacustricola clade (Bragança and Costa 2019; Bragança unpublished data). There are three main subgroups within the southern clade. These are the “L.” katangae (Boulenger, 1912) group which is defined by a zigzag black mark along the lower portion of the flank, the “L.” hutereaui (Boulenger, 1913) group which is defined by the presence of barred dorsal, anal and caudal-fins and a conspicuous reticulate pattern on scale margins, and the “L.” johnstoni (Günther,1894) group which is defined by a slender body and lack of the aforementioned characters. All three subgroups have broadly similar distribution patterns, with some species occurring sympatrically. 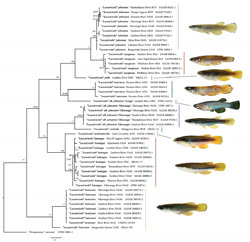